Barancik Foundation is governed by our Board of Directors who set organization direction, provide oversight, and ensure the necessary resources for our work. These members share the philosophy and values of the Foundation: Stewardship, Integrity, and Service. 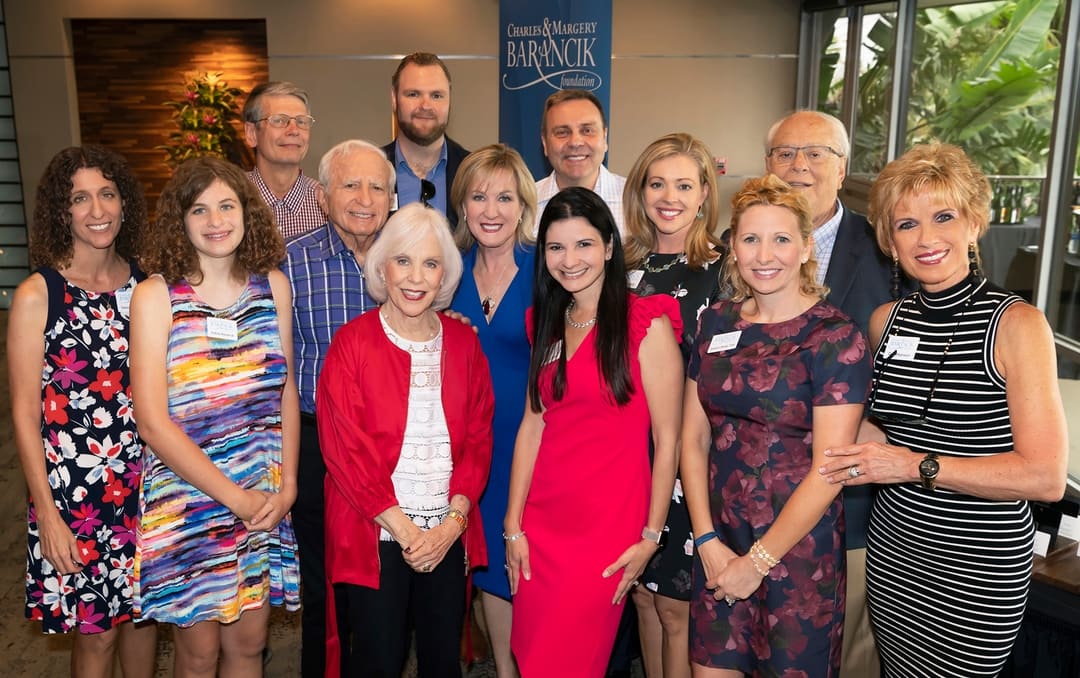 Our Board of Directors is comprised of family, close friends, and leaders in the Sarasota community, all united by the goal to carry out Margie and Chuck’s vision to make a meaningful difference in the lives of others. As board members, we take our founding values to heart.

We are honored to be the stewards of their philanthropy. Every day we work to ensure that its impact can be sustained over time and can bring together partnerships for greater synergies. Each member serves with integrity, putting aside personal opinions and interests to objectively support the focus areas Margie and Chuck prioritized. We also embrace the role of service to the community, which they modelled for us so well throughout their life.

Staying apprised of the needs of our community, we have met amazing leaders and heard inspiring stories of innovation and resilience. We deeply thank all of those who share and carry out Margie and Chuck’s vision. As they both knew so well, all of us on the Board have discovered how much we receive when we help others.

Rebecca Harris Barancik has been honored to be chair of the Barancik Foundation since its inception in 2014. Originally from Hartford, CT, Rebecca holds a Ph.D. in Economics from The George Washington University and a B.A. in Economics from Georgetown University. She teaches Economics at the University of South Florida St. Petersburg, where she also co-leads the Women and Leadership Initiative. Rebecca is an active lay leader and Board member of Temple Beth-El in St. Petersburg. She also serves on the Executive Board of Tampa Bay’s Phi Beta Kappa Alumni Association.

Both professionally and personally, Rebecca is passionate about promoting equity, providing educational opportunities, and protecting the environment – and the interplay between and among these issues. At the Foundation, she feels fortunate to carry out Margie and Chuck’s vision to help make a difference in these areas as well as many others. Rebecca lives in St. Petersburg, FL, with her husband, Scott, where they are raising one daughter and two cats.

Hosana Fieber is the Chief Financial Officer at Tervis Tumbler and also leads the company’s sustainability mission. Prior to this position she was Chief Financial Officer at ASO, a private label bandage manufacturer in Sarasota. Hosana is from Miami, Florida, where her accounting career began. She received her Bachelor’s at the University of Miami, and later she attended Florida State University where she earned an MBA. She was in public accounting for six years, working with manufacturing companies as well as non-profit organizations, before coming into the private sector. Hosana enjoys working on community projects, as she has been involved with organizations like Rotary club, Habitat for Humanity, and Girl Scouts.

Lisa Hise spent 23 years as a public defender in southern Arizona. Phoenix-born, Lisa received her undergraduate degree from Arizona State University and her law degree from the University of Arizona, where she was one of the first recipients of the Paul Marcus Public Interest Fellowship. Since retiring from the law, she has worked with middle schoolers as a literacy coach and has been an animal rehab volunteer and raptor rescuer at the Tucson Wildlife Center. Lisa has also served on the board of directors of the Southwest Center for Law and Policy since its inception in 2002.

Married to Steve Barancik, Lisa is motivated by a concern for the environment, a love for wildlife (as well as her chickens!) and a desire to improve our coexistence with the planet.

Mike Gronli is an award winning CPA. He worked with privately-held businesses and owners for ten years at the public accounting firm of Arthur Andersen & Co., specializing in income, estate and fiduciary tax planning. He has been employed by the Barancik family since 1987, with the following areas of responsibility: income taxes; estate, trust and gift matters; liaison for the family with the management of numerous businesses; retirement plans; acquisitions and divestitures; employee benefits; insurance; investments; philanthropy; confidant and advisor. He has headed up the Barancik family office since 2000.

Stephanie Jones is an experienced corporate recruitment and human resource professional with knowledge in healthcare and professional services, including the Big 4. She is currently the Director of Global Experienced Talent Acquisition for Duff & Phelps, the world’s premier provider of governance, risk, and transparency solutions. Her volunteer work includes schools, planning committee, and county boundary committee. Stephanie graduated from University of Richmond with a degree in Speech Communications. She and her husband Gene have two grown children, Brittany and Gene.

Teri has more than 25 years of experience in philanthropic leadership. Prior to joining the Barancik Foundation, she was president and CEO of Gulf Coast Community Foundation. During her 13-year tenure the foundation awarded nearly $200 million in grants and initiatives. She was vice president for gift planning and donor relations at The Cleveland Foundation, the oldest and one of the largest community foundations in the United States. She also worked as vice president of external relations for Central Indiana Community Foundation and was the founding president of Legacy Fund of Hamilton County (Indiana).

Teri volunteers her leadership nationally, statewide, and regionally. Currently, she serves on the Ringling College of Art and Design board and its trustee committee, the Florida Philanthropic Network board, where she is secretary/treasurer, the board of Marie Selby Botanical Gardens and its governance committee, the Greater Sarasota Chamber of Commerce board and its executive committee, and a director on the board of Gulfside Bank. Her previous board leadership includes, Council on Foundations and its public policy committee, chairing the Council on Foundations Community Foundation Leadership Team, chairing Community Foundations of Florida’s board, and serving on Florida Chamber Foundation’s board and investment committee. She was also on the Sarasota County Economic Development Corporation board and USF Sarasota-Manatee Community Leadership Council.

Teri is honored frequently for her professional and personal contributions to the community. She received the International Women’s Forum “Women Who Make a Difference Award;” State College of Florida President’s Award of Distinction; Tampa Bay Partnership Chair’s Cup for Excellence in Regionalism; Girls Inc. of Sarasota County “She Knows Where She’s Going” Award; and AJC Civic Achievement Award. Teri was named a “Best Boss” by 941CEO magazine, one of the “50 Most Powerful People on the Gulf Coast” by Gulf Coast Business Review, and to SRQ Magazine’s Women in Business Leadership Circle.

A San Diego native, Teri earned her bachelor’s degree in journalism from San Diego State University. Upon graduating, she served as a public affairs officer in the U.S. Air Force. Teri is an alumnus of Harvard Business School, having completed its Advanced Management Program.

Gerry Lublin is an accomplished attorney, served in the United States Army Reserve and is a dedicated volunteer. Mr. Lublin attended Case Western Reserve University where he earned his undergraduate and law degrees. He practiced law for thirty years in Hartford, Connecticut specializing in civil trial law, arbitration, family mediation and Superior Court Special Master Work, for which he received two Certificates of Commendation from the Connecticut Judicial Department. Upon retiring to Sarasota, Mr. Lublin remained active in the legal community as a Certified Florida Family Mediator and member of the Florida Academy of Professional Mediators.

Mr. Lublin is deeply passionate about youth mentoring. In Hartford, he volunteered with Big Brothers Big Sisters and served as a juvenile court volunteer public defender. He frequently lectures in schools on the Bill of Rights and Constitution. He continues to mentor youth in Sarasota as the coach of Booker High School’s Speech & Debate Team and has coached the Moot Court & Mock Trial teams. He teaches a Street Law Course at Booker and has volunteered as a tutor at the Boys & Girls Club of Sarasota County.

Early on, Deb was mostly satisfied with her employment in administrative areas of finance and education in public schools and technical colleges; in a U.S.D.A. agency’s conservation/ environmental protection program; in assistance to senior executive management of a Fortune 500 company.

Then, over 37 years ago, Deb came onboard with Charles Barancik and entered the fascinating world of the streamlined Barancik organization of privately-held companies and of entrepreneurship. She has never looked back from this welcome, diverse environment!

Deb is an essential member of the Barancik team, as controller/office manager, assistant and confidant, and has continuously been entrusted with a myriad of responsibilities, including but not limited to, administration, personnel, accounting, investment reporting.

In 2014, again rewarding work evolved with the activation of the Charles and Margery Barancik Foundation. Deb’s early years set the desire to help others whenever possible. As a Board Director, she is honored to be a part of the Foundation as it works to help those in need and to fulfill its mission to make a difference in Sarasota and beyond.

Teri has more than 25 years of experience in philanthropic leadership. Prior to joining the Barancik Foundation, she was president and CEO of Gulf Coast Community Foundation. During her 13-year tenure the foundation awarded nearly $200 million in grants and initiatives. She was vice president for gift planning and donor relations at The Cleveland Foundation, the oldest and one of the largest community foundations in the United States. She also worked as vice president of external relations for Central Indiana Community Foundation and was the founding president of Legacy Fund of Hamilton County (Indiana).

John Annis is the Senior Vice President of Collaboration and Impact for Charles & Margery Barancik Foundation, where he is part of a team committed to promoting meaningful changes in the areas of education, humanitarian causes, arts and culture, the environment and medical research.

John is passionate about creating intergenerational cycles of opportunity for children and their families. Because of his work in this area, he was named as Aspen Institute Ascend Fellow in 2015. Ascend Fellows work across sectors to advance economic security, educational success and health and well-being.

Kelly Romanoff has worked in philanthropy for 15 years. Her career began at Florida Philanthropic Network where she worked while earning her Masters in Public Administration from the University of Central Florida.

In her position, Kelly manages a portfolio of nonprofit grants and oversees the Foundation’s reporting process. She is also a lead contributor to the community initiatives First 1,000 Days Sarasota County, Partners for Green Places, and the Manatee County Foster Care Initiative.

Born and raised in South Africa, Murray Devine’s diverse life experiences have cultivated a passion for building equity and inclusion. He believes in the power of science-based, strategic communications and storytelling to drive positive social change on public interest issues.

In his position, Murray supports the Foundation’s grantees in illustrating the impact of our work together to the greater community. He is also responsible for recording institutional knowledge and documenting lessons learned through our grants and initiatives.

Jessica Bailey Polk is responsible for a host of internal functions essential to the Foundation’s operations, including overall administrative support and office management. Additionally, she provides governance support and coordinates the internal grant process, sponsorships, and the Foundation’s special events. Prior to joining the Foundation, Jessica worked at Gulf Coast Community Foundation and in international business development for MoneyShow.

“Sound strategic planning, along with substantial investment in R&D and new product innovation, establishes our companies as leaders.”